Are you reading in Nononosanctuary.xyz? No? Then go read there!

Saotome-san Doesn’t Have a Reset Program

I felt like I saw something in the corner of my eyes that was zooming across the room.

More specifically, it was something black, quick, and primitively scary. It is native to the tropics and likely classified as arthropods.

I wanted to feign ignorance and just laugh it away, but “its” strong presence could be felt across the room. I started to recall distant memories, of time when human beings ran around the mountain while carrying a stone hammer to ring an alarm.

「Okay, let’s calm down. In scenarios like this, it’s better to gauge up the situation.」

I have a bowl in my hand. Then there’s an appetizing fragrance that’s coming from the stove, which has freshly cooked deep fried tofu and miso soup.

There is freshly cooked and still steaming rice in the rice cooker, and on the sink there is some marinated pork chop that is ready to be cooked. The marinating sauce is based on the one I bought from the supermarket, adding sake, grated ginger, and then the secret ingredient, mayonnaise. That is my special sauce. Beside that there is the frying pan that is ready to be used.

From there, and even further than there is the fridge. Maybe because she bought it while dreaming that she will find someone to live with, it is a very large refrigerator, and what’s inside its freezer is the very special dessert ready for after dinner.

And then, on that wall, a black silhouette can be seen.

A sound came out from my mouth that even I myself don’t know what it meant. Maybe I can’t really tease Mio-san about her sudden outbursts.

「Kuh, I was expecting that after seeing this room’s initial condition!」

The black devil that I’ve read about before in books, that devil which has its claws reaching all over Japan. It’s no wonder this existence is here considering this room belongs to Mio-san, who just leaves her letters all around and never take care of the boxes in her house.

「Be cool2 me. I’ve found R◯id3 this afternoon.  This brand is good so this should work well4. 」

There is only one conclusion that can be drawn from this.

It’s checkmate. I’m in such a bad situation that all I can say is checkmate.

Actually, wait. If I were to be alone then it would indeed be checkmate, but there’s another person in this house. If it’s her, someone that has a good concentration during some scenarios, then she may be able to go against G5. Even though it’s shameful for me to rely on women, I have no choice if we’re against this kind of opposition.

While I was about to call for help, Mio-san’s door swung open violently, banging the wall.

Well, what should I say. I don’t know the proper name but it’s a pose done by Keanu Reeves or Steven Seagal when breaking in from outside through the window. Yup, that’s the pose that Mio-san is doing right now after bursting through the door.

If I add one more thing, this is a Mio-san that was in the middle of changing her clothes.

「The top and bottom are matching!」

It is a match of light blue. I can’t help but be natural and feel happy seeing this.

Not to mention, didn’t she come out too fast? I feel like she came out before I could call out to her. Also, no matter how tired Mio-san ever was, she never came out wearing just her underwear.

But soon, those questions didn’t matter at all, because what followed after Mio-san was a black breeze.

It looks like Mio-san was pushed over here while fighting that black devil. It is said that if there is one, then there are thirty hiding. That said, I wasn’t expecting two of them to come out simultaneously.

To avoid a black devil that is coming near, you can try pulling a move that’s usually done by Bruce Willis, where you go down, roll and hide behind a wall. That’s what Mio-san did right now, she went behind my shoulders and rolled down to my leg, then stayed still there. 6

「Mio-san! I just want to confirm. Are you okay going against “G”?」

「No good! She’s glitching out! Please reset! Restart! Most of the bugs and glitches are fixed after that!」

Unfortunately, it doesn’t look like Mio-san has that kind of feature within her. She is still holding tight on my waist while making some sounds that I don’t think are really words. Those tears coming out from her black eyes are the sign that my hopes are also streaming down, and vanishing.

Mio-san, who is in a lace underwear, is still holding on my waist. Normally, it’s something that I would be happy to experience, but in this situation, there’s no time for me to think about that.

In the meantime, it seems that the enemy who was in stand by on the wall near the fridge started to advance towards us.

「Looks like this is the end of our line….. Just kidding, I can’t let this stay like this.」

If it was me alone, then for sure I would have already given up. Giving up the warm dinner, summer clothes that I brought out, some books, and that sofa for two people that doesn’t have any kind of wear, giving up all of that just to run away from home.

But now, I am Mio-san’s neighbor and her employee.

I can’t run away outside while bringing Mio-san who swings her E-cups while in her underwear form, and leaving her here alone is not something that I can do. As a man, I need to brace myself for the upcoming battle.

As soon as I was able to prepare myself, my hot head cooled down at once.

That’s right. This is just a mere insect that has neither poison nor fangs. If I try to think calmly, there’s actually nothing to be afraid of. 9 10

When I realized, I was holding Mio-san up while running around the house. All I could hear was Mio-san’s “ABABABABA” kind of scream.

Kicking that table for two persons, also kicking that small chair where that small white stuffed fox was sitting, avoiding that TV because somehow I was calm enough to know that TV is not something to kick, and just like that, I was running around the house.

This will be recorded later as the first labor accident at this workplace, where everything I have to do is say “okaerinasai” to Mio-san. But that is a story for later. Measures to prevent recurrence will also be decided later.

By the way, since “G” went away from the kitchen, I was able to get the R◯id then use it, and after that, they died. 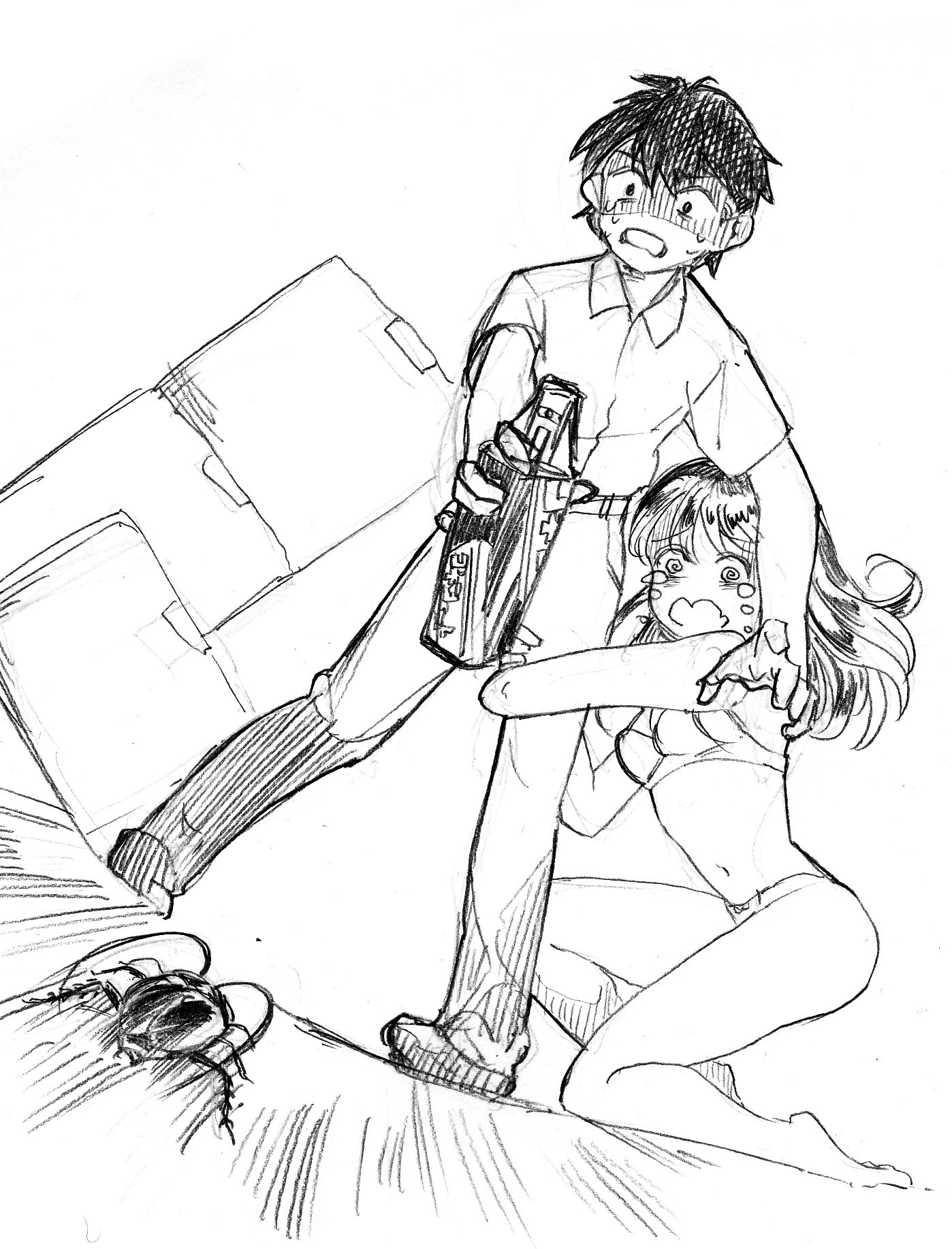 Well, I remember myself chasing those around the house since they are fast in the instance that they appear… and I just know that I need to get rid of them or else my peace won’t be continued..!! ..

Pro tip: use a plastic bag, chips bag or whatever you have in hand. Gently lower the open end and cover it.

Done. Most of the time it will fly up. All you need to do is close the bag. If you make sudden move it will move, run or fly toward something (Most likely you)

Then again, I don’t feel disgust or anything toward cockroaches. So I’m pretty calm when dealing with them. Sometime they ran up on my arm or my leg and I just brush them off.

It’s still quite unsettling though if a cockroach latches on to you without being noticed. You get that sudden itchy feeling because of its legs. I don’t hate cockroaches though. In fact I used to carry dead ones and show them to my female friends when I was young.

I used to volunteer at a wildlife rehabilitation center they had snapping turtles(no other turtles 🙁 ), foxes, possums, owls, frogs, and Madagascar hissing cockroaches among other things. I was in charge of Opossums, cockroaches and the snapping turtles and I loved the unique features of them ….with the occasional scare from the Opossums who was in a bad mood some days (almost forgot to put the o on opossums the o is important). The opossums need care and space mood pending and a clean towel and newspaper in the cage, the cockroaches need the cage cleaned and a fresh… Read more »

called it on it being G

thanks for the chapter

Everyone’s gangsta until the cockroach starts flying.
Thanks for the chapter.

Thanks for the chapter 😀

This series is wholesome! THank you for translating it!

LOLOLOL, that was hilarious! That said, I always kinda thought that Raid was one of those brands that never really sees traction outside the U.S. and Canada, apparently I was wrong.

Thx for the chapter~

Thanks for the chapter! What’s with Japanese people and cockroaches though? Of all novels and manga I read, they tend to overreact when there’s “G” lurking around.

Frankly I have no idea why this kind of overreactions happen in novels, but it’s funny to read about. I think it might just be a trope, since I sadly remember about a show (a really disgusting show for me at least) involving pipes, blowing air, and cockroaches. I would not recommend googling that.

the one where the girl inhaled the G? Thats a G ood one

I see what you did there

See ? I knew it it was Gokiburi.

ROFL best chapter ever , cant stop laughing .i would be freaking out too haha. thank you so much for the amazing chapter .

Flying at ya!
Hate it when that happens
Lol
Thanks for the chapter

This site uses cookies to improve your experience. By continuing to use this site, you agree to their use. Read more about it here.